Springtime in La Mesa, means it is time for another Broadway musical production from La Mesa's own Peter Pan Junior Theater.  Now in its 47th year, PPJT was started by Mr. Bob Kuhne while a teacher at Casa De Oro Elementary school.  Mr. Kuhne brought the theater to La Mesa when he moved to Lemon Ave. Elementary School to teach 6th grade.  Twenty-five years ago Kuhne handed the theater over to Dr. Mark Arapostathis, co-founder of La Mesa Arts Academy, Director of Theatre Arts at LMAAC and the…

Tonight during the “Holiday in the Village” event, a live broadcast will originate from the site of the soon to come Fourpenny House restaurant on La Mesa Blvd.   “Real Talk La Mesa” is a live on air show hosted by La Mesa resident Jack Rowell.  Usually airing on Thursday mornings on ESPN 1700AM from 11am to Noon, tonight a special broadcast will air…

A New Tradition Starting in the Village

Downtown La Mesa is looking brighter than ever for the holidays.  Last week the City of La Mesa hosted its annual "Shimmer" event, which kicks off the holiday season with a tree and street lighting ceremony.  Held on Thursday, December 1st, Mayor Mark Arapostathis, Vice Mayor Guy McWhirter, Councilwoman Kristine Alessio, and Councilman-elect…

LA MESA . . . Long-time City of La Mesa employee, City Manager Dave Witt has announced his retirement to be effective August 5, 2016. Mr. Witt has served in several positions with La Mesa, starting as the Assistant Planning Director in 1985. Many of his years with La Mesa were involved with planning and redevelopment

activities. Prior to his last position as City… 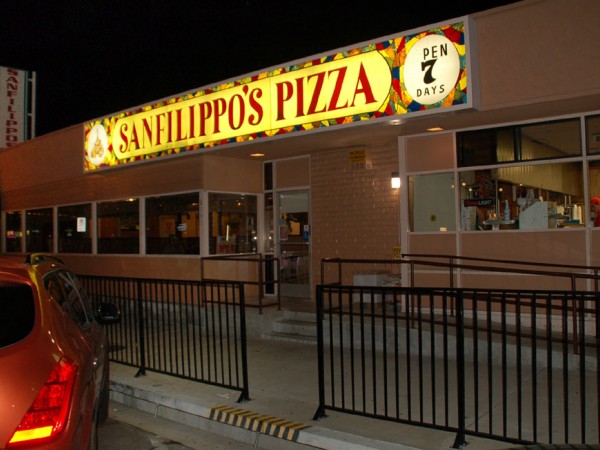 Sanfilippo's will officially close on Sunday, June 26th.  After 41 years of serving our community by providing jobs and being a gathering place for so many special occasions - the doors will close.  The La Mesa Chamber of Commerce hosted a farewell on Friday, June 24th at 2 p.m. to recognized Anna Sanfilippo and her…

La Mesa – The arts are alive and well in the city of La Mesa.  This week will mark the 10th anniversary for La Mesa’s own C. Hook Theater.  Short for Captain Hook Theater, C. Hook began as the sister organization to Peter Pan Junior Theater, which just celebrated its 46th year this past March by producing the musical “ANNIE”.   C. Hook Theater is the creation of Dr. Mark Arapostathis, Mayor of the city of La Mesa as well as director of Peter Pan Jr. Theater.  Dr. A, as… This Sunday, February 28th at 1:00pm a milestone will be reached in west La Mesa.   Wong’s Golden Palace will be celebrating its golden anniversary.  Since 1966 Wong’s Golden Palace has been a fixture along University Avenue.   With its iconic architecture, traditional decor and unique culinary offerings, Wong’s offers its…

State of the City - La Mesa La Mesa Mayor Mark Arapostathis makes an annual state-of-the-city speech at the first meeting of each year. Dr. A,  as he is called, focused on the completion of the Downtown Street Project as well as the city's finances. He also spoke of the future of the property near the civic center.

The full text of his speech is below:
MAYOR… Come join the party.  The La Mesa Arts Foundation will be holding a fundraiser at the La Mesa Community Center on Saturday, January 23, 2016 from 6:30pm  -…

The holiday season will officially be kicked off this Wednesday evening in Downtown La Mesa. Appearing In Concert at The Table: Debbie Neigher, Keith Mullins and Jasmine Commerce Experience the luminous singing and expressive keyboard work of Debbie Neigher, one of San Francisco’s most promising singer-songwriters.  Known for her dream-like ballads as well as jazz-infused vocals and triumphant pop anthems, Debbie will, between 7:30 and 9:30pm on October 7, 2015, join with Galway born singer-guitarist Keith Mullins, and award-winning*…